Voice acting: Why it’s good to talk to yourself – Carrie Olsen Voiceover 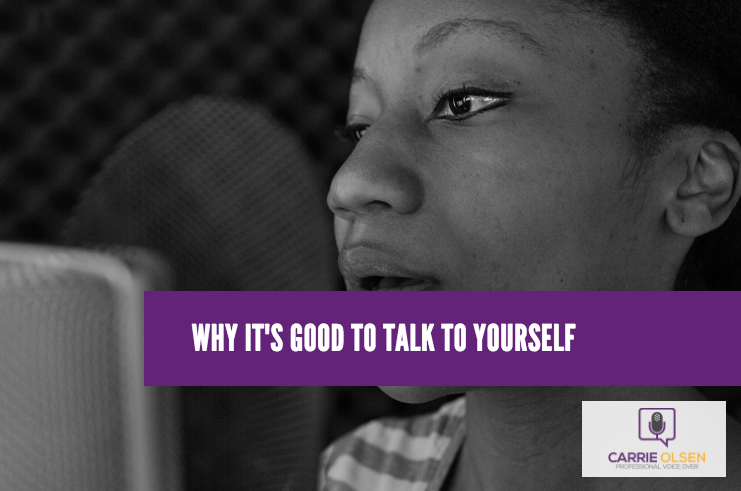 Voice acting: Why it’s good to talk to yourself

Do you ever find yourself having both sides of a make believe conversation between you and… you? It would be really weird for anyone in any other profession to admit that they talk to themselves out loud and often. But fortunately, voice actors have a job where it’s not only acceptable to do that, it’s required! So if anyone ever implies that you seem a little unstable because you talk to yourself, you can reply, “I’m not unstable; I’m a voice actor. Which means I get to use my crazy to make money. Which makes me resourceful. Not unstable.”

If you are “gifted” in the having-pretend-conversations-with-yourself-while-doing-voices-and-making-other-people-question-your-sanity department, you actually have a leg up when it comes to voiceover performance skills. So put your craziness to good work while you read about how talking to yourself benefits your voiceover career.

If you’ve ever had a voiceover performance coaching session, hopefully you’ve been asked the question, “Who are you talking to?” On-camera actors normally have the advantage of staring their scene partner in the face, so they are constantly reminded of who their “audience” is. But as a voice actor, it can be easy to get stuck in your own head. Which is where your imagination comes in.

Delivering a quality voiceover performance isn’t all about being able to pronounce things clearly or having an appealing voice. Don’t forget the mental exercise of visualizing your environment. When you “see” your scene partner as you are reading, think about what happened before your interaction with them that prompted you to say what you’ll be reading from the script. Think about what will happen after the “conversation.” And envision their reactions as you speak. That will help inform how your read develops as you move through the script.

So when you find yourself talking to yourself, consider it practice! Use that skill of being able to make a fake conversation seem real to bring more believability (and booked jobs!) to your voiceover reads.

Please log in again. The login page will open in a new tab. After logging in you can close it and return to this page.