Voice Actors: Why You Should Always Give 100 Percent – Carrie Olsen Voiceover 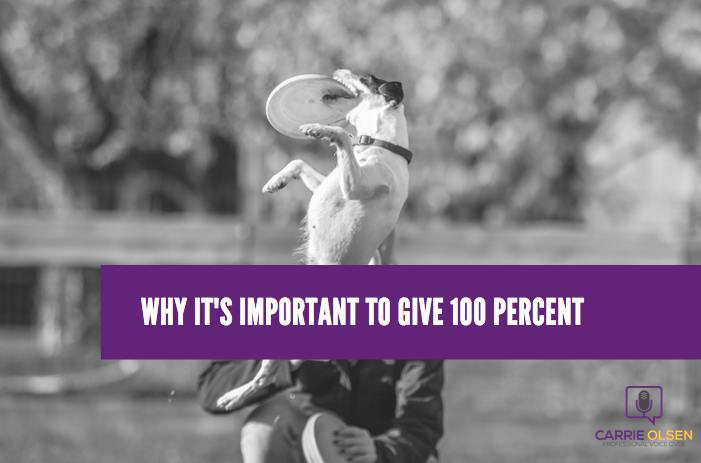 “That sounds nice,” thought Newbie Ned. “But right now I make $18 an hour at my day job. So anything more than that is an upgrade for me.”

As a new voice actor, it’s hard to imagine turning down a job because, according to industry standards, the rate is too low. Especially when that “low rate” is higher than what you’re used to making at your day job.

Though it’s a hard pill to swallow, some new voice actors will turn down a job so as to keep their standards high. Some others adopt the mindset that they will take anything that comes their way in the early days, in the hopes of raising their rates once they’re more experienced.

But this post isn’t about which jobs you should or shouldn’t accept and why.

Because however you choose to engage this situation, there is one thing you need to make sure you do. Whether you are voicing a national Toyota ad, or doing a student project with a rate so low you regret taking it on, give the job 100 percent of your effort.

All experienced voice actors have had those jobs that they either naively accepted because they didn’t want to miss an opportunity, or that seemed like a great opportunity at first, only to become a nightmare situation once they got into it. When you find yourself in one of those situations where you wish you had just passed on the job altogether, you are still a voice actor. Which means you are still a representative of this industry and should do your best to represent it—and yourself—well.

Here are some examples of less than ideal situations you may come across (by the way, these situations happen in all industries that have freelance workers, not just voiceover):

In my first year as a voice actor, I accepted a job that paid too little. I think the rate was about $60. The job was only to read three short sentences, so it’s not like it took me a long time to do, but I felt funny accepting a job that I knew should have paid more. Aside from the low rate, I actually had a great experience with the client. They were appreciative and loved my work. They said they might have more work for me in the future. I didn’t have my hopes up, and this wasn’t especially exciting to me because I didn’t really want more low-paying work, and I had already decided that if they offered me more work at rates similar to the rate of that first job, I would say no.

I didn’t hear from the client for months. But when I did, they had a much larger project for me, with a much larger budget. I was thrilled that they reached out again and eagerly accepted and completed the job. It turns out that the first low-paying job they offered me was an exception, not the rule, and that the jobs they normally produce are much bigger and pay more. Over the next couple of years, they sent me consistent work at above industry standard rates. Today, they are one of my most consistent—and high-paying—clients.

The moral here isn’t that you should take on work that doesn’t pay well. I think you should avoid that if at all possible. But if you do find yourself doing a job that you would rather just get out of, you should still do your best work. Even if it never leads to anything else, at least you will feel good about your service. And you can have confidence that all of the voiceover you have put out into the world is work you can be proud of.

And, of course, if the job does end up leading to other, better opportunities, awesome.

Note: If the client has mislead you, that is a different situation. In this post, I am only referring to jobs in which you either knew the job was worth more than what you agreed to do it for, or jobs in which you failed to get clarity on what the job involved.

Please log in again. The login page will open in a new tab. After logging in you can close it and return to this page.