Breaking into Voice Over Work: How Podcasting Jumpstarted My Career - Carrie Olsen Voiceover 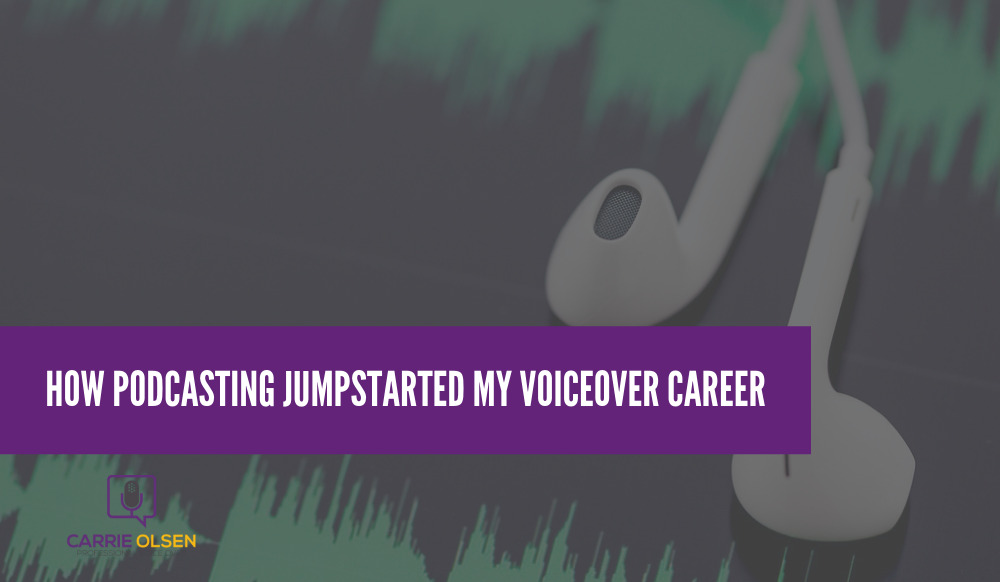 Breaking into Voice Over Work: How Podcasting Jumpstarted My Career

What if there was a button you could push that would instantly transport you to a dinner table surrounded by your best friends in the world? What if that same button could help you be a better cook and learn a new language? And what if that button could help you stay in shape and save money? You’d probably be wringing your hands together Gollum style trying to figure out just how far you’d go to get the button, maybe it would help you in breaking into voice over work (sounds like a dream, doesn’t it?).

What if I told you that you can have it, and probably already do, for free? The magic button I’m talking about is the Subscribe button in Apple Podcasts or your Stitcher app. Even Amazon and Spotify now offer podcast streaming. Podcasting isn’t going away, it’s becoming even more popular.

If you’re familiar with my voiceover journey, you know that I first learned about voice over when voice actor, Alyson Steel, was interviewed on the Go For It Show podcast with Tysen Webb. (I would link to it, but it no longer exists.) ;(

You may also know that my husband and I had a podcast of our own before I started doing VO, which is why I didn’t need to buy any new recording equipment before I started auditioning. I used the same $100 mic we used to podcast with to record my first hundred or so voice over jobs. (You can find my list of recommended voice over equipment here.)

But what you probably don’t know is just how far back my history with podcasting goes. Or just how big of an influence it has had on my life and career. It’s big.

In 2011 my husband, Derek, started a financial coaching business. He was a big fan of Dan Miller’s podcast, and he wanted to have a podcast to complement his business as well. But he had no idea how to do it.

Enter the Podcast Answer Man. We actually heard about The Man, Cliff Ravenscraft, at an event we went to at Dan Miller’s house in 2011. But at the time, he was just a name. We had no idea that he would become a part of our story. When Derek set off to start his podcast, he remembered Cliff (or maybe he just Googled “how to podcast” — Cliff is the first result to show up), and went to his site to learn how to set up a podcast feed. After Derek went through some of Cliff’s free resources, he had a podcast. Thus began our love affair with podcasting.

In 2012, I started watching a show called Downton Abbey. I loved the show and wanted more after each episode so I searched iTunes (now known as Apple Podcasts) to see if there was a good podcast dedicated to Downton Abbey. There wasn’t. So one day, while Derek was working, I got out his podcasting equipment, sat down in our apartment, and recorded my first podcast episode: The Downton Abbey Reflection. It was a lot of fun, so I kept it up. I didn’t publicize my podcast to anyone, but quickly people started to find it and subscribe. I was floored by how many downloads it was getting!

Later that year, Derek got to meet Cliff in person at a workshop for aspiring speakers. He told Cliff about how much we’d learned from him and mentioned my Downton Abbey podcast in passing. He had no idea that Cliff and his wife were huge fans of the show (the actual show, not my podcast). That simple conversation set our lives down a course we could not have imagined.

Around November of 2012, Cliff let me and Derek know about a client of his who was starting a new project. He recommended us specifically for the project because of my Downton Abbey podcast. The project was a network of podcasts called TV Talk that focused on providing commentary on a few dozen TV shows. I was hired to co-host the podcast series on Downton Abbey. Derek was eventually hired as a co-host and producer. Between the two of us we hosted and produced hundreds of podcast episodes. Derek and I made around $50,000 over the next year and a half from this project. (Did I mention that I’m glad Derek mentioned my podcast to Cliff at the speaking event?)

Breaking into Voice Over Work: The Role of Podcasts

As a result of all of this podcasting, Derek and I joined several podcasting groups on Facebook. One day, someone posted that we should all try listening to a fellow member’s podcast that we had never listened to before. I randomly picked Tysen Webb’s podcast and downloaded the latest episode to my iPhone so I could listen on my way to work. (Again, it’s no longer available.)

Alyson Steel was Tysen’s guest. And after I heard her interview, I hired her to be my voice over coach. I had never even heard of voice over before. Until I listened to this interview I had no idea that voice acting was a full time career option.

Well, I’ve told the rest of the story many times. I started coaching with Alyson. I became obsessed with voice over and devoured everything I could on the subject. I started getting paid voice over jobs within weeks. I booked a national radio campaign, and within four months I quit my job to do VO full-time. (This was in 2014.)

Lessons Learned in my VO Journey (And the Role of Podcasts!)

I still look in awe at the chain of events that led me here. But there are two things that this story reminds me of every time I tell it.

1. Listening to podcasts can change your life

Truly. Even if you never have a podcast of your own or it doesn’t impact your life as obviously as it has mine, it can still open up new worlds for you. I challenge you to head over to the iTunes store or Stitcher, Spotify or Amazon and find a new podcast you might be interested in. Let me know in the comments what your favorite shows are and why.

My story consists of many twists and turns, and at each one of them is a person who, whether they knew it or not, played a huge role in it. For me, those people are Alyson Steel, Tysen Webb, my husband, Julian Fellowes (yes, I credit the creator of Downton Abbey), Amy Porterfield, Dan Miller, and of course, Cliff Ravenscraft. I love thinking that as I grow my business and share what I’ve learned that I’ll get to be a part of someone else’s story in the same way these people have been a part of mine.

If you’re a voice over talent, or are aspiring to be one, podcasting is a great way for you to hone your microphone and recording skills while getting your voice out there and having fun. Similarly, if you are just someone who prefers podcasting over reading blogs to learn all you can about voiceover, I have drawn up a list of my favorite podcasts to get you started. It includes a roster of VO-related and just-for-fun podcasts – you might find something interesting!

I’ll throw in a list of podcasts that I’ve had the pleasure of being interviewed on. So if you just can’t get enough of me talking about voice over you can binge listen to all the shows on this list.  And if you’d like to interview me on your podcast, please contact me here. I’d love to connect!

Sign up to get Carrie's favorite podcasts sent straight to your inbox.

Why are you so optimistic about the new year?
How to Get a Job Doing Voice Over Work: Email Marketing
How to Do Voice Over Work Part-Time
How to prepare for directed voice over session
Voiceover Communities and Forums
Win more voice over auditions – Four tips with Alyson Steel

Enter your email address and click the button below to get the list of my favorite podcasts!